No, that’s not a typo. Bent Of The River is an Audubon Center preserve in Southbury Connecticut. It also happens to be on a bend of the Pomperaug river.

The car was parked in deep mud, everything else was either solid ice or hard crust snow. This was my first time here so I was not sure of where any trails might be.  A path along the banks of the stream seemed as good as any place.

It was completely void of movement. The brook was full and rushing however the only hint of life were tree stumps left behind by local Beavers.  The fields and stream are beautiful this time of year so there was plenty of landscape photos to take.

We finally did find the centers barn and being an Audubon preserve, bird feeders. Everywhere. A field and barn yard filled with small birds. The barn has a porch over looking the fields. It’s a great place to take a million photos of the local small birds. Like the thousand other shots we already have. But of course we stayed and photographed everything that moved. 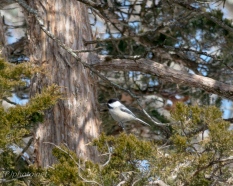 For me the real find was an Eastern Blue Bird on the road back to the car. I don’t remember the last time I saw one.

The final show was announced before we could see it. Crows, loud and then diving around the wood line. Finally a Broadwing Hawk flew off and high followed by the crows on his tail.

All in all it is a great place to wander around in and we will be back, in summer.

Over the last few months many of the articles here revolved around the frozen Connecticut river. At times this year the river bed was like a highway. I photographed coyotes, eagles, and numerous other animals all along the river stretching from Hartford south to the shore.

Now, mid March, the river is officially open. So far no floods, a few ice jams, but nothing of concern yet. To the north I’m sure much of the Connecticut river is still iced over. We may still have an adventure or two. 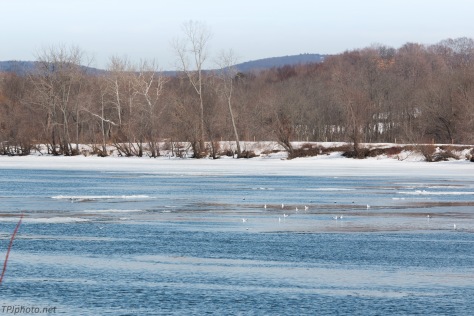 Once the river opens a entirely new group of residents come back.

Ring Necks did better than most ducks during the period of hunting for feathers in the 1800s. In New England, especially Connecticut, hats were a big business. Think the Stetson cow boy hat. Made down the road, not anywhere near the wild west.  While other birds were hunted to near extinction Ring Necks did fine. They don’t gather in large flocks and stay in the rivers away from all the shore birds, and people. 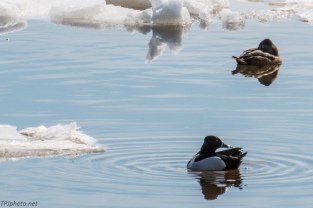 Loons are usually associated with Maine. Not in the winter. They move down the rivers following the freeze. Finally they stay around the salt water inlets until spring. They also have a complete new ‘look’ in winter.

The first time you see the small Horned Grebe there is a shock. They are not wounded, just have weird eyes. 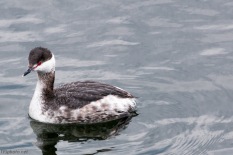 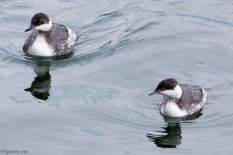 Like the Grebe, a Red Breasted Merganser will dive and stay submerged on the bottom for long periods of time. We have several different types of Mergansers but the Red Breasted seems to be the most prevalent this year.

I haven’t included any geese or mallards since they appear everywhere and I have a series to be written that prominently feature them as photography examples anyway.

Oh, and there is another important item related to the rivers opening. The mud has arrived. 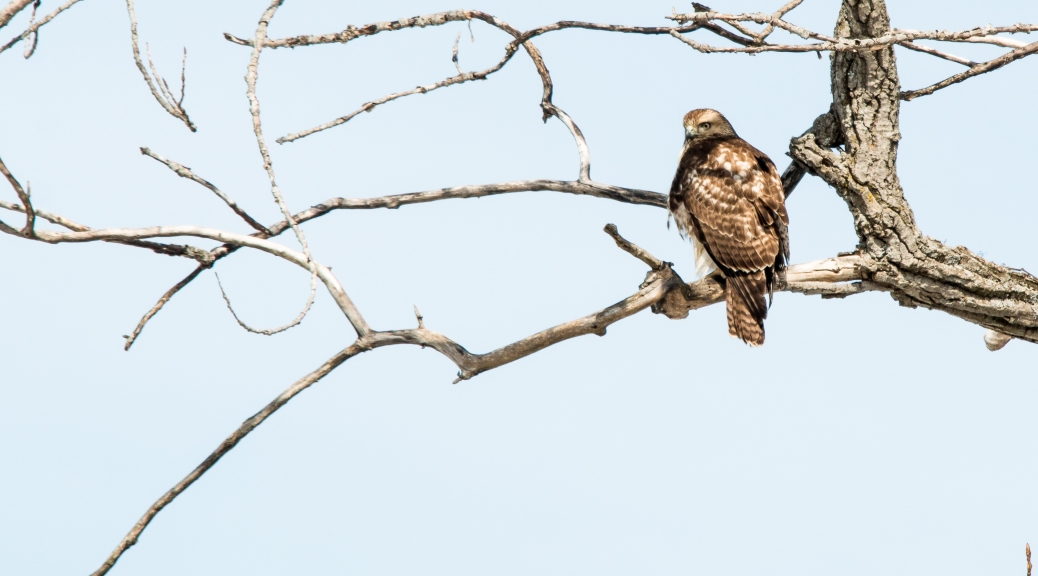 This Broad Wing hawk was not pleased when I stopped to photograph him.

Last week we went to the Connecticut shore with the idea of getting different types of photographs.  With all the snow piled on the roads I found myself going to the same locations too often.  With spring coming it won’t be long until we need to change our style of images. Trees will have leaves hiding wildlife and bushes will block views.

While sitting and resting awhile I noticed large parts of the beach had no sand at all. Snow was melting and as far as you looked the ground was covered with small shells. It’s easy to assume a beach with sand when looking at photos. Here, millions of tiny shells with different shapes and colors.

I find the most amazing things while holding the camera and looking for the next shot.

It was a fairly one sided conversation. Loud too. He barged right in and start ‘talking’ right away.

Right before my new friend came along I was standing behind a snow bank overlooking the Connecticut river. Several Ring Neck ducks were coming along and I just wanted them to get closer for a few photos.  As usual it was quiet. The wind and Gulls were all you could hear. I never saw him coming and suddenly he landed on a nearby sign post and began to yell at me. From very close range too! Got my attention.

The ducks were obviously forgotten real quick. As I shot pictures of him he sat there scowling. I expected him to take off as soon as I pointed the camera at him. We were close and I’m sure the lens looked like a cannon to him. He didn’t move and continued that stare.  It was getting a little weird.

Taking a few more quick shots I backed up a bit to watch him. This was my first conversation with a Crow, even though it was one sided.  I thought I would watch and see what else he had in mind.

Funny thing was, as soon as I stepped back he dropped to the ground, picked up some unseen scrap and left as fast as he arrived.

I’m guessing this was Crow speak for “excuse me, you’re standing on my lunch”. 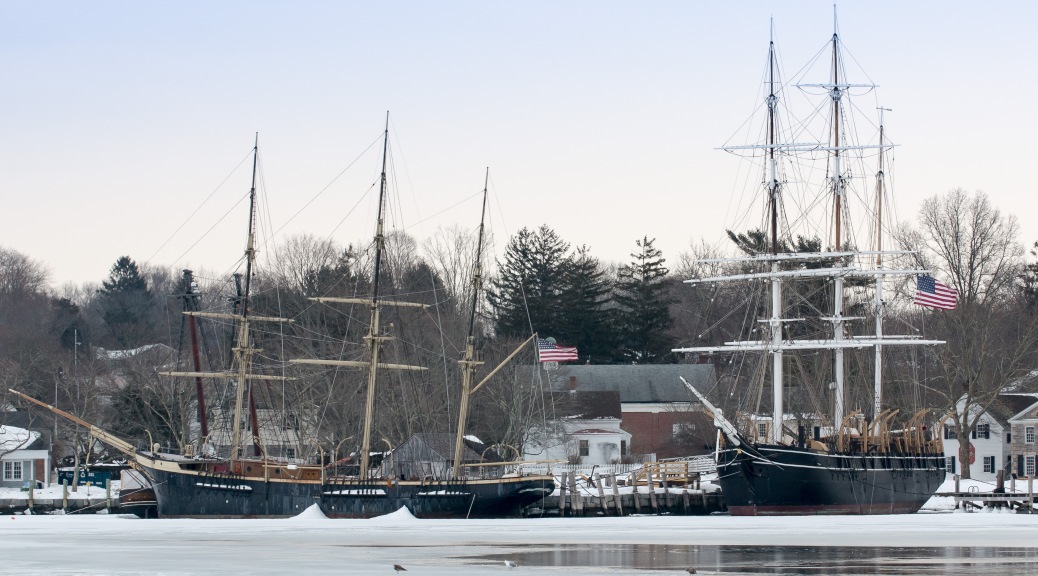 Those of us who live here, in Connecticut, visit Mystic and the Seaport often.  The town main street has all the usual shops selling upscale tourist trinkets. It is also the home to one of the last sailing ship repair and restoration organizations. Shipwrights trained in the traditional building techniques maintain ships owned by the Seaport Museum as well as other historical vessels from around the east coast.

Since we have many regular viewers from across the US and around the world I thought these photographs of the ships and docks in winter might be interesting. When warm weather arrives I will revisit the shipyard and museum.

Mystic was a center of ship building from the 1600s until the early 1800s. Ultimately the steam ship and the industrial revolution centered in New England changed that. Ship building ended and factories opened.

The Mystic Museum and Seaport opened in 1929. The Preservation Shipyard owns the last wooden whaler sailing ship, Charles W Morgan. Also they are responsible for 16 unique sailing ships. Currently the Mayflower II is in port for a 2 year restoration.

These shots were taken looking up the Mystic river, from near town center, towards the narrows where the ships dock and shipyard buildings are.  The river itself is small and shallow. Most ships are towed up river.

One last piece of vital information, or movie trivia, there really is a ‘Mystic Pizza’ as in the famous Julia Roberts film. But no, she doesn’t work there.

In Flanders Fields the poppies blow
Between the crosses row on row,
That mark our place; and in the sky
The larks, still bravely singing, fly
Scarce heard amid the guns below.

We are the Dead. Short days ago
We lived, felt dawn, saw sunset glow,
Loved and were loved, and now we lie
In Flanders fields.

Take up our quarrel with the foe:
To you from failing hands we throw
The torch; be yours to hold it high.
If ye break faith with us who die
We shall not sleep, though poppies grow
In Flanders fields.

The following is presented with my utmost respect and gratitude.

The Great Blue Heron is one of the most beautiful and imposing birds in New England. Eagles, Osprey, and Blue Herons are the shots all New England photographers want.

If I hadn’t turned my head at the exact moment this Heron stretched his wings these pictures would never have been taken. I also need to thank the drivers behind us for not running me down as I threw myself from the car. I should have become a hood ornament at that moment. 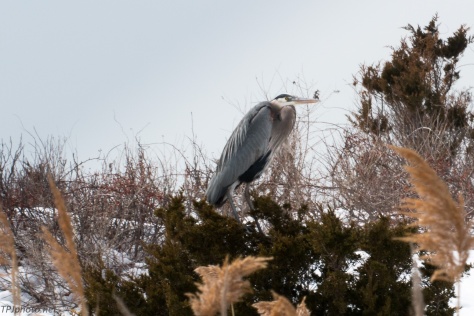 The bird had perched on a small scrub pine on the edge of a marsh. If he had remained in the reeds he would have been invisible. 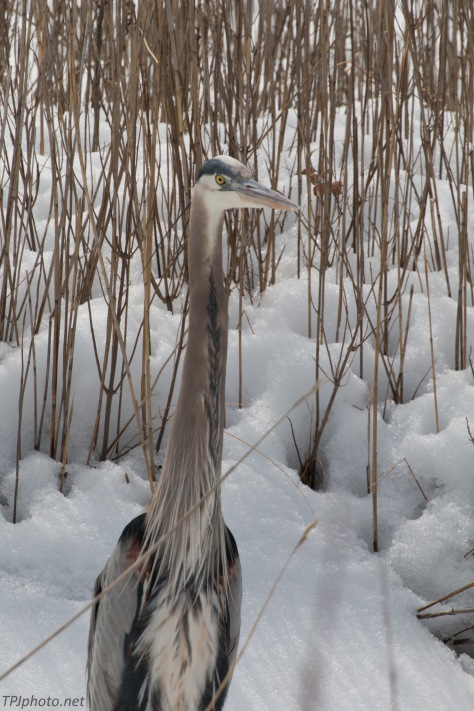 Blues are the largest North American Heron and have a head-to-tail length of  36-54 inches (91–137 cm). The tallest and heaviest of the Blue Herons live in New England. He might not have been bigger than me, but that was the impression I got.

Herons don’t fly. They levitate into the air and simply glide away. 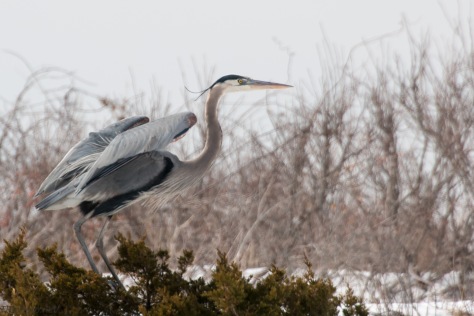 I am grateful this particular Heron sat and watched as I stumbled around photographing him. The bird was very patient with us and we left him alone in the marsh after a few minutes. 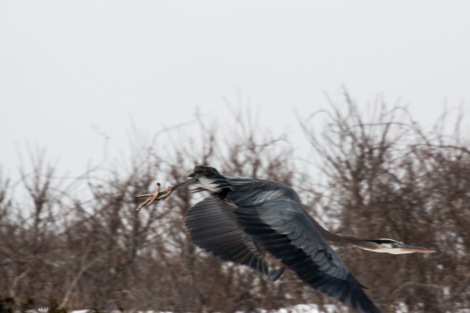